The Federal Court is an international exemplar of judicial development and, as Australia's largest superior court, has dedicated significant resources to facilitating cooperation between superior courts around the world. The Court's objective in collaborating with other jurisdictions is to promote respect for the rule of law, judicial independence and the development of judicial services, particularly in the Asia and Pacific region.

Having collaborated with 52 countries across almost 500 activities, the Court has significant experience designing and managing judicial development initiatives around the world. These initiatives have supported almost 10,000 people in various areas and resulted in a number of beneficial outcomes including improvements in: access to justice, efficiency in the administration of justice, competence of officers to deliver justice, transparency, accountability and governance, the availability of technical resources and local capacity to lead and manage change. More information on country-specific activities and achievements can be found in the activities by country section.

The Court currently manages a regional initiative in the Pacific and has Memoranda of Understanding with the Supreme Court of Vanuatu, the Supreme Court of Indonesia and the Supreme and National Courts of Justice in Papua New Guinea. Under the guidance of the Chief Justice, the International Development and Cooperation Committee and the Principal Registrar, the Court's international programs draw upon the leadership and expertise of judges and judicial administrators within and beyond the Court, as well as an extensive network of experienced judicial development specialists around the world. With its wealth of judicial development and support experience, the Federal Court is peerless in its ability to assist its partners to adapt, implement and embed solutions to problems common to all courts committed to good governance, accessibility and the rule of law. 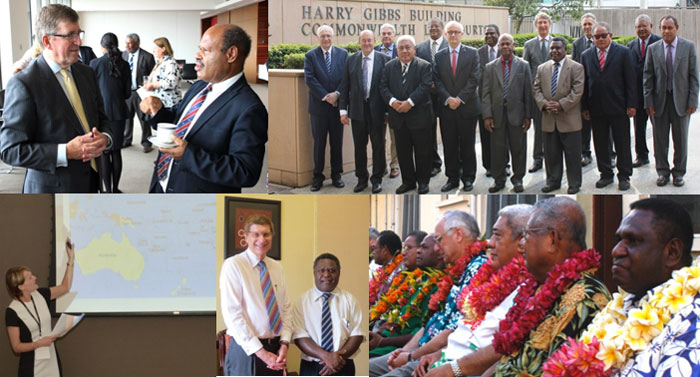